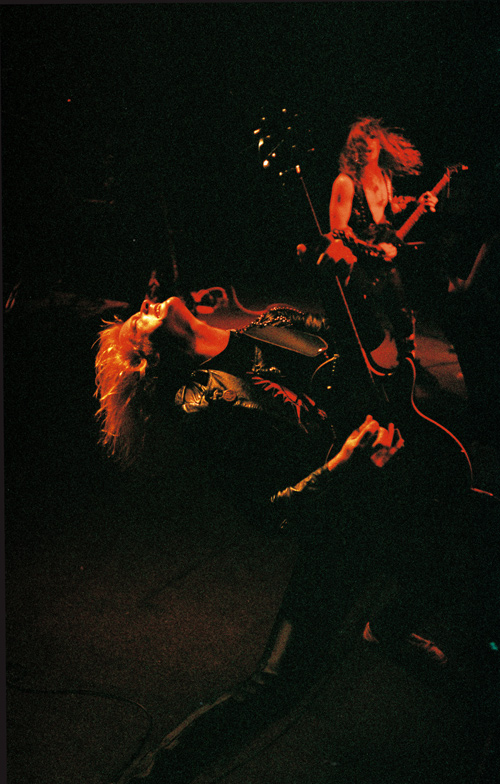 Above crushing photo of Jeff Hanneman in full black leather backbend by Harald Oimoen, from the book Murder in the Front Row: Shots From the Bay Area Thrash Metal Epicenter

Speaking as a first-day buyer of Slayer’s Show No Mercy, rest in peace, piece by piece, Jeff Hanneman. We lost the prime mover of Slayer today, after his long extended absence from one of the most crucial metal bands of all time. This recalcitrant and ugly-minded California blonde engineered the band’s twisted guitar approach and borderline reprehensible lyrical direction. He will be missed more as each day passes.

I met Jeff Hanneman several times during his life, and he was always grumpy, withdrawn, and antisocial. Although extremely sharp, he didn’t seem to remember major events in his life and Slayer’s career, he was hyper into the present moment. Those who know Slayer well know their attachment to mass-production U.S. family saloon franchise TGIFriday’s, whose Orange County, CA, branch near the Slayer practice space was unofficial band clubhouse. We once went to a Friday’s in Times Square, and when the waitress handed us menus, Jeff handed his straight back to her, announcing that he had the offerings memorized already. The server looked blankly back at Jeff; turned out they didn’t offer what he wanted at that location. He sulked the rest of the night!

Jeff had a malevolent sense of humor, he delighted in the misfortune of others, just as we all do, but unlike many he didn’t keep his delight a secret. I stood with him once for half an hour watching people trip over a sidewalk pothole on the streets of Manhattan. He couldn’t get enough of the hilarity of men and women in business suits looking up to see a TV show stunt being filmed and then sprawling on their faces on the pavement. Well, it was pretty funny.

Sorry, I can’t summon better words now to summarize what we all feel about surrendering one of the ten most important heavy metal figures of all time. I hope the general media understands how important this loss is. Not that it matters, except that Jeff Hanneman’s name deserves to be lit up in neon, pressed into hard black memory, and carved into stone for the sake of the future galactic visitors who find our Earth in ruins.