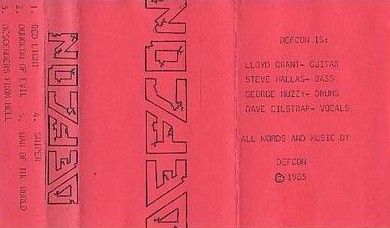 The underpinnings of much of heavy metal’s past are rotting away on cassette demo tapes, and we’re here to help. Let the rare punk wars continue, and watch the lawyers of aging funksters litigate! We’re distributing a kind of brain-rattling information that always was free, and still wants to be. There are over 1000 original cassette demo tapes here at Demo-lition HQ, and each deserves a dose of preservation for one reason or another.

What better place to begin than with the most-heavily traded metal band of all time? No, not Death, Master, or Necrophagia, but a more controversial name by today’s standards: Metallica. Before relocating to San Francisco and famously founding Bay Area Thrash, the pimply teens were doggerel NWOBHM rejects toughing it out in Los Angeles. The drummer traded tapes with a guy who was starting a record label, launching with a compilation called Metal Massacre.

At the start of 1982, “Metallica” had about three songs written, and could play a couple of covers by Savage and Sweet Savage. Nobody in the group could play a guitar solo, though, so to seal their spot on Metal Massacre they pulled in a ringer, Jamaican-American guitarist Lloyd Grant. He lived in Pasadena where Eddie Van Halen reigned, so he had to be good. He quickly ripped out the solo break to “Hit the Lights” that essentially is still used to this day, then disappeared.

Fast forward to 1985, and Metallica were fast conquering the metal world. Even Grant’s replacement in the band, Dave Mustaine, quit and got massive frequent flyer miles with his new band Megadeth. The Metallica name had a royal touch… but nobody remembered poor old Lloyd Grant. Then, stabbing out of anonymity, Lloyd emerged from nowhere in 1985 with DEFCON.

While not the most tightly-formed thrash assault unit on the block, DEFCON on its first demo more than warranted the Metallica pedigree. There are lots of killer moments here, held in place by catchy songwriting and propelled by enthusiastic guitar and drums. Uninitiated listeners will howl at the occasional outdated vocal shrieks, but I should point out that spoken style on most verses was inspired by hardcore and ahead of its time. Someone should have signed these guys immediately, and slapped on a sticker that read: “EX-METALLICA THRASH: Not as good as Megadeth, but way better than Assassin or Mandator!” I think DEFCON’s only appearance on vinyl was on a cheaply-pressed New Renaissance Records compilation.

Thrash! One happy postscript: After 20 years, Lloyd Grant has just surfaced wearing a knit rasta cap and playing “a wide spectrum of dark sounds with a positive message” in his new band Pharoah.

So welcome to Demo-lition, and special thanks to John Alderman, Dianna Dilworth, and Metal Forces magazine.