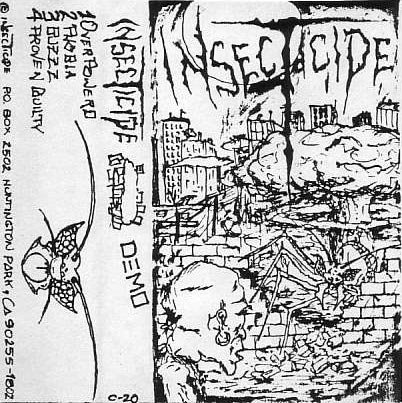 Jetting along with punky speed thrash in the vein of RKL, Blacktask, and hometown heroes Slayer, INSECTICIDE is a textbook example of the 1987 U.S. metal underground. The clean snarling vocals, Kreator riffs, and mosh parts are pure thrashcore — even if the cassette is labeled “INSECTICIDE – U.S. Power Metal.” (Let that be a reminder: if you argue over genre definitions, you are an idiot. They can change overnight.)

I appreciate how the frantic guitars and bass blur together to sound like swarming wasps and bees. The short instrumental “Buzz” is a brief glance of the blast-beat grindcore that would begin taking over the underground in 1988. Another demo and an album or two also exist — along with the obligatory New Renaissance compilation appearance.

Just to prove nothing is sacred, here’s Insecticide’s MySpace page with some scans of old photos and flyers from shows with heavy hitters like Process Revealed and Tyrannicide