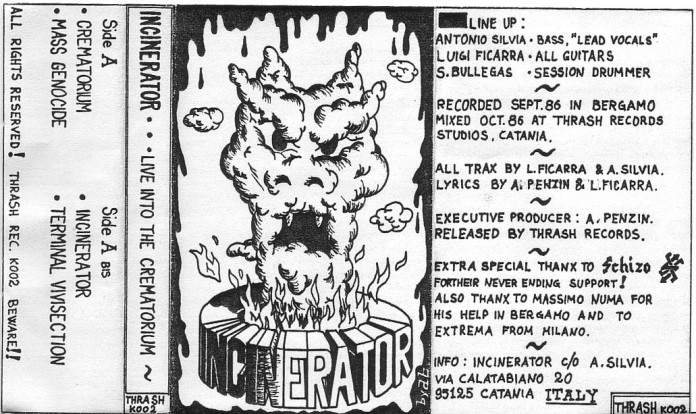 Global warming and 100-degree weather in the city this summer doesn’t seem so bad compared to being incinerated and cremated for an eternity in the imaginations of these deathly Italian thrashers. The cover art features a smoke monster worthy of Super Mario World, while the handwritten cassette card shouts out Incinerator’s good pals in Schizo. This demo is kind of a Kreator-influenced mess, but the juicy synths on the intro “Crematorium,” the finger-tapping guitar solo on “Mass Genocide,” and the tender acoustic intro to “Incinerator” are all hidden stashes of gold coins — or more like baby steps in the evolution of extreme European metal. I’ve never heard the 1989 album on Sonic Attack Records — it’s called UH!?! — guess it got too hot to talk in complete words?

INCINERATOR * “Live Into the Crematorium” demo 1986