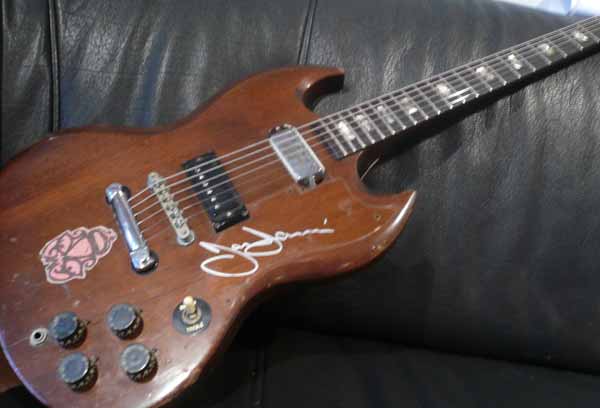 I had a chance to have Tony Iommi, grand wizard of the horned Gibson, sign my battered SG last year, but I passed. I didn’t want to blow a chance to uncover the secrets of the universe by turning into an autograph hound during an interview. But I kind of regretted it. So when I was told that Heaven & Hell, the Dio-era line-up of Black Sabbath, were coming to my Sirius show after their triumphant Radio City gig, I started hunting for a pen. Tony, Geezer, Dio, and Vinny Appice came up for a long talk session, and afterwards I plopped the SG on Uncle Tony’s lap. He gave it a good once-over, looked really serious when he asked, “What about this crack in the neck?” Ha! Iommi humor! Honestly, if there is a crack, it’s sealed with sweat and finger goo. I told him I hoped his signature would hold this banged-up thing with dented frets, rusting hardware, and countless divots together for a couple more years. “You ought to see mine!” he laughed. Now I’m in the market for a clear pick guard to protect and show off the blessing of the master of all metal riffs.

The interview turned out great, by the way. The meat of it will air starting Tuesday, April 10, at 9p Eastern on Hard Attack.