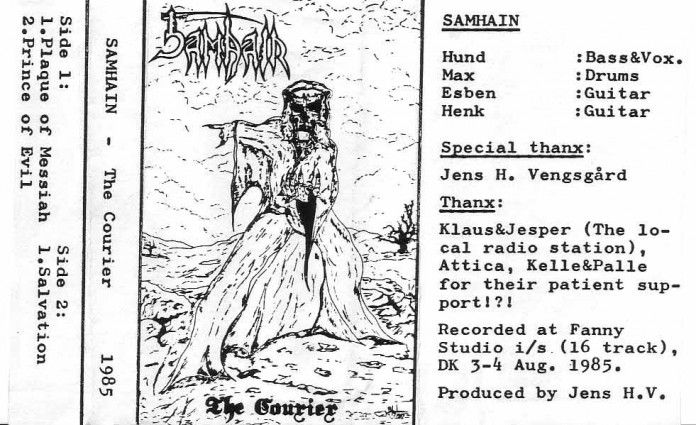 Samhain were the dark children of Mercyful Fate, Celtic Frost, Master, and the entire experience of the demo-trading universe. The band was comprised of tape-trading fanatics and scenesters — guitarist Henk Leviathan edited Blackthorn fanzine, which is supposedly where Darkthrone took its name. You can definitely smell the influence of Samhain (DK) on Mayhem, Darkthrone, Old Funeral, and other second wave black metal bands who sought the influence of something dark and primal. Listening to this oddly-named demo — did Henk pay for the recording by working as a bike messenger or something? — you’ll realize that even early bands like Nihilist (pre-Entombed), Amon (pre-Deicide), and Xecutioner (pre-Obituary) were formed when the death metal scene was already in full swing.

I always argue that guttural, so-called “Cookie Monster” vocals weren’t invented, the style evolved over hundreds of bands, one demo cassette at a time over a five year period from 1983-1988. This grim 1985 proclamation of Scandinavian death metal is great evidence of that claim.

Unfortunately, the cheap red plastic cassette is already degrading pretty badly, and most of “Plaque of Messiah” sounds pretty chewy. Consider it a haunting (and stay away from Postens Lydbrev brand tapes!)

When they learned about Glenn Danzig’s band Samhain (no doubt through a Metallica interview somewhere), Samhain (DK) soon changed its name to Desexult, and unleashed a slew of demos between 1986 and 1988 including the infamous “S.O.D.F.O.A.D.” But that’s a story for another time…