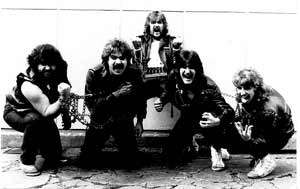 The first of at least six CHAINSAWs in the metal toolshed, this lot of German headbangers released two 4-song demo tapes in 1985 — you’re about to hear the first. Years before speed metal would become the slick, processed assault spit by the likes of Bay Area’s best, biker rats like these guys struggled to hold onto their British Steel-era Priest roots after getting kicked in the ass by Metallica’s Kill ‘Em All. As a consequence, this demo is all over the place — talking about picking up hot mamas on a Saturday night out of one side of its mouth while warning of undead zombies on the other. Basically, Chainsaw are a loose, enthusiastic mess! And from their puffy white sneakers to their sleazy mustaches, they’re like a goony yearbook collage of all that was metal in 1985.

Unfortunately, another Essen band called Kreator also recorded a debut demo in 1985, soon consigning Chainsaw and other NWOBHM-bound acts like them to the Kraut thrash heap. There’s a Chainsaw LP floating around out there called Hell’s Burnin’ Up!, featuring some ripe artwork of a chainsaw-wielding demon doing home improvements in an orange hell.