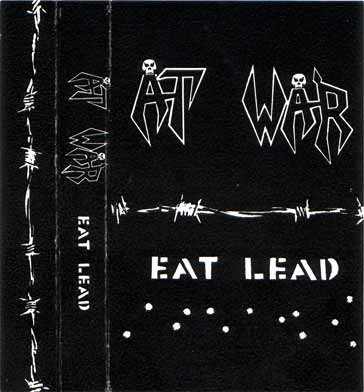 If you ever wondered what Venom would have sounded like if they were gun-toting hillbilly beach bums from Virginia, then the trio At War are the camo-laden answer to your prayers. Presenting two fine examples of basic sexist, warmongering thrash, At War reputedly sold tens of thousands of copies of this demo, probably outstripping their two subsequent releases on New Renaissance Records.The A-side, “Rapechase,” combines predatory courtship tactics and deer hunting, while B-side “Eat Lead” is a solid anthem that salutes the invention of bullets. For most thrash bands of the era — like Megadeth, Artillery, and Carnivore — the firepower and military imagery was mostly symbolic, tongue-in-cheek, or part of a bigger picture. For At War, it was simply a prefab image concept that appealed to them more than black magic or politics. They got a fair amount of traction out of combining their love of Motörhead and Rambo .

So throw your guns in the air, and take aim at one of the most prominent demos of its day.

The core members demobilized in the early 1990s, but regrouped in 2006 for rehearsals. The At War MySpace page features a full history, great photos of singer/bassist Paul Arnold’s Rickenbacker basses, and news on upcoming plans. Glad to see these grizzled old warriors heading back to the front, just in time for World War III.