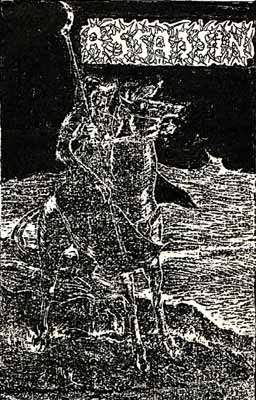 I don’t know who Frau Krause is, or Herr Keul or Frau Schultz, but they must be pretty horrible people to deserve wishes of “deathly pain” on the thanks list of this 1985 debut demo by Assassin. If I can hazard a guess, they were probably all sour-faced instructors that Dusseldorf Hauptschule put in charge of discouraging the antics of hyperactive German speed metal tykes. But can you really blame Krause & Co. for cracking down on Assassin? I mean, things were finally starting to settle down in Deutschland after all those World Wars, and the nasty business with the RAF and Baader-Meinhof bombings in the 1970s. Then here comes a generation of jean-jacketed hoodlums in the 1980s with nothing more on their minds then growing little mustaches, drawing pentagrams everywhere, and shaking their heads like spastics while laughing hysterically.

Based on Assassin’s great Interstellar Experience album, one of my favorite examples of fun thrashing hyperspeed metal, I expected something a little more polished on this demo. The rudiments here are crude, but effective. “Holy Terror” delivers seven loosely-knit tracks that flail along, barking and biting like some kind of deranged evil acolytes of Exodus and NME, stopping only for remarkably simple yet fluid guitar solos.

I think these guys were only about 15, but they knew what they wanted to hear. When it kicks into gear, the dual-guitar speed metal here is more extreme and more musical than Kreator. Assassin were obviously bred from hectic hardcore, not old NWOBHM battle hymns, and the distance between these children of deathly thrash and their countrymen Chainsaw [see previous post] in 1985 was HUGE. From here, it was only a short conceptual hop to death metal.

The band wandered away between 1989 and 2002. After attempting to sooth their inner beasts by attending to life’s responsibilities for a while, they’ve returned to tap the wellspring of speed metal thrills. They’ve released a live album and have been touring Europe semi-rigorously — check the official Assassin site for details and T-shirt shopping.