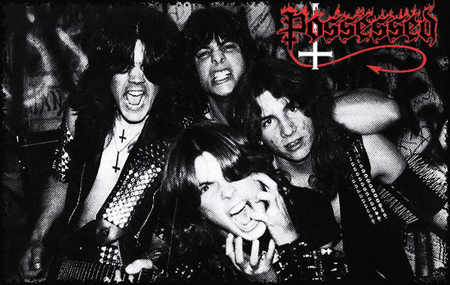 Here’s a paragraph on the band from Sound of the Beast:

“Virulent new players joined Slayer on the cutting edge, playing with skill to match their guts. In junior high, outside San Francisco, Larry Lalonde and Jeff Becerra played UFO songs in Blizzard. They wore sleeveless American flag T-shirts and grew hair to their shoulders, the farthest their mothers would permit. Upon reaching high school the pair were recruited by Mike Torrao and Mike Sus for the less-wholesome Possessed. “Their singer had shot himself in the head,” says Becerra, “and they didn’t have a bass player. I wanted to go heavier anyway. I was into being heavy as far as drinking beer, going out with as many girls as I could, and playing as fast and heavy as I could, like Motörhead. I asked Mike what the name of the band was, and he said ‘Possessed.’ I said it sounded kinda satanic, and he said, ‘Well, it is!’ That was kinda scary.”