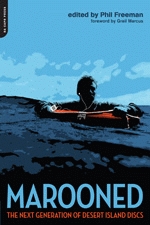 I wrote an essay on Iron Maiden’s Killers for the new book Marooned: The Next Generation of Desert Island Discs. It was easy to summon white-knuckle terror for my story — returning to New York from a Melvins/Napalm Death show in London ten years ago, my plane made an emergency landing inside the Arctic Circle. I took it from there.

This book picks up the thread of Stranded: Rock and Roll for a Desert Island, a 1979-era bunch of bananas by Lester Bangs, Robert Christgau, Nick Tosches, Janet Maslin and Greil Marcus on the obsessive desert island disc experience. Marcus returned from his island in 2007 to write the introduction to Marooned, and snot-nosed upstarts like me, Simon Reynolds, John Darnielle, Derek Taylor, and Jeff Chang each scrawled a few thousand words in the sand about our end-all, be-all wish for the last record on Earth. Lots of metal represented — besides Killers, there are good, funny pieces on Motörhead’s No Remorse, Scorpions’ Virgin Killer, and Dio’s Anthology.

I’ll be on WNYC’s Soundcheck program today at 1PM ET with editor Phil Freeman (No Remorse) and writer Greg Tate (Miles Davis’ Bitches Brew) to talk about the book. Also actress Minnie Driver, who I hear is really into Anaal Nathrakh. LISTEN LIVE