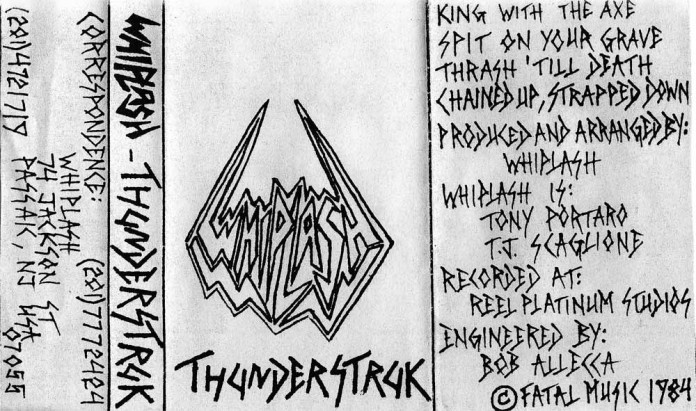 Looks like someone in Holland got wise and re-released Whiplash’s 1984 Thunderstruk demo a few years back, and they’re even keeping the CD available. I won’t intrude on the legitimate reissue by digitizing the tapes, then, but here is the original tape cover and a song sample — click the image for a big fat download if you want to make a poster:

The so-called “three Tonys” from New Jersey — including vocalist Tony Portaro, short-term Slayer drummer TJ Scaglione, and the late Tony Bono — rose quickly by following the typical thrash route from underground buzz band to finding an independent label reckless enough to encourage them. In their case, it was the fledgling Roadrunner Records USA, and Whiplash along with King Diamond and Carnivore were one of the Dutch label’s first three signings when they started an American division in 1985. Three crazed, manic albums followed, and eventually Roadrunner sold enough Whiplash LPs to afford to sign Nickelback and Slipknot…or something like that.

Now check out what madness “No Life ‘Til Leather” did wrought 3,500 miles away in Passaic:

Whiplash – “Spit on Your Grave” from Thunderstruk [MP3]

The complete Whiplash demos are collected on Messages in Blood. And, hey bonus — you can download a demo by the pre-Whiplash band Jackhammer RIGHT HERE.