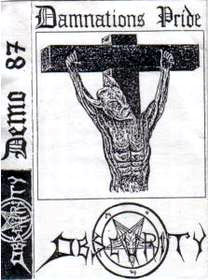 While getting the manuscript for Daniel Ekeroth’s Swedish Death Metal ready for print, I picked up a good copy of Obscurity’s 2nd demo, “Damnation’s Pride,” from 1987. I don’t think the world could have been handed a bigger hint that Sweden would take over everything in five years’ time.

Their truth-in-advertising band name aside, Obscurity had a commanding presence. A far cry from their chaotic first demo (where the guitarists dubbed in drums after recording everything else!), “Damnation’s Pride” is just a triumph of ripping madness. The thick guitars, the gut-spewing vocals, the intense speed, and most of all that loveable Swedish death-groove are already in full swing here. If you like Nihilist’s 1988 demos but want to go deeper into the genesis of death metal, look no further:

My friends at Scarlet Records in Italy reissued both demos on CD back in 1998. The band themselves host a cryptic web site HERE, and their minimal MySpace streaming the four songs from this demo is HERE. Now if only the band would reform…