Home Metal Photography Up, Up and Away the Irons! 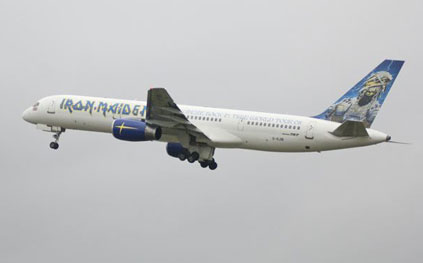 If you have no qualms about riding in a jet decorated with a cartoon corpse, British Airways is renting the freshly-painted Iron Maiden 2008 tour plane from the band for the next couple months. In other words, before Steve Harris and his hardy crew of guitarists set foot inside, lots of commuting door-to-door potato salesmen, priests, and semi-pro pudding tasters will have already tempted fate and the gods of the rainy skies between Gatwick and Birmingham. Would Barney from Napalm Death be nervous about flying in this plane? As long as they pipe in “Rime of the Ancient Mariner” during boarding and deplaning it would probably be okay. (I’d think twice about stepping into the Carcass Reek of Putrefaction reunion tour plane, though.)

UPDATE: This plane is now named “Ed Force One.”