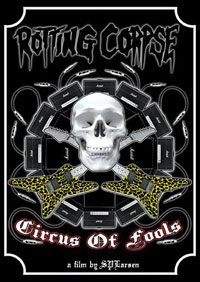 In the meantime, avail ye of one the funniest and pure-hearted DVD documents ever to arise from the corpse of thrash or any form of metal, Rotting Corpse – Circus of Fools, by director SPLarsen with huge participation by the band. Here’s the trailer:

As you can see, speed-addled nonsense abounds. The movie itself is a series of semi-sequential three to four-minute narratives by a large cast of characters, building up to a thrilling climax where singer/guitarist Walt Trachsler gets his ass kicked on stage by Tom Wopat, aka Luke Duke from the original Dukes of Hazzard. (Huh? Don’t worry, I didn’t ruin the ending.)

Circus of Fools is a great story of a group of metal friends putting everything into a fool’s errand, making a lot of mistakes, and taking pleasure from perverse actions. For instance, Walt smashes his guitar into pieces at every show (given to him at no small expense in the mid-80s by older local rock guitarist “Diamond” Darrell Abbott!), only to rebuild it before the next gig. I’ve never seen a better document of how a fringe metal band forms, survives, and fights the world.

At the end of the day, this is all about the friendships of a bunch of dudes from Texas, and how they lived metal every day. Former Overkill drummer Rat Skates’ Born in the Basement DVD is equally insightful and entertaining, yet he reveals more of the insane logistics and career aspects of launching the thrash movement from scratch. The two movies together paint the thrash microcosm in great detail–and I hope in 3005 a conquering alien race discovers these great documents of our human heritage.