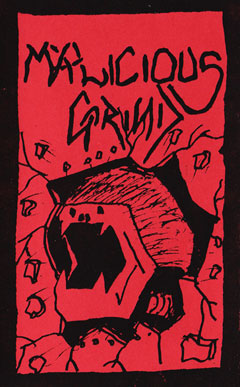 Though they surfaced during a time when the grindcore term was just beginning to be tossed around, suburban L.A. act Malicious Grind was a relentless crossover monster in the vein of D.R.I., S.O.D., and maybe Cryptic Slaughter. The loose energy and low-res garage production obscure how much this is a pretty powerful band, jetting between fast blasts of 1987 speed like “Fasterspaz” and ultra-crunchy mosh parts like the catchy “Stupid Cops.” (Not just the police feel the heat–they also stick it to some guy called “Ronald Reagan.”)

While I was dubbing this demo, coincidentally Ingrid got in touch after hearing Insecticide on my Bloody Roots show on Sirius. She added a funny detail: “We opened up for Nuclear Assault and Verbal Abuse–and we were banned from Hollywood clubs for our fans doing pits before pits were acceptable!”

Go to cdbaby.com for tracks from their LP and to read a couple old reviews from MaximumRocknroll and Thrasher. Note to Tribe Called Quest: If your wallet turns up, we’ll call you.