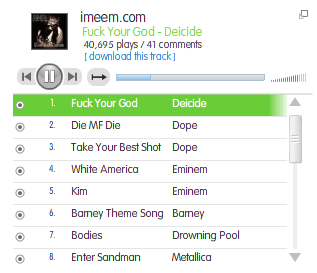 I guess if anybody hates Christianity more than Glen Benton, it’s al-Qaeda. My former patrons (briefly) over at Mother Jones have compiled a streaming audio playlist built from leaked interrogation logs from U.S. military prisons, and look who’s getting enemy combatants talking: Deicide! Also appearing: Metallica, Dope, Drowning Pool, and King Diamond’s uncle, Neil Diamond. Of course, torture is in the ear (or waterboarded nose) of the beholder, and most of us would rather wear an orange jumpsuit than listen to Christina Aguilera or Barney the Dinosaur at any volume. But doesn’t Eninem’s “White America,” end with an outburst of fuck yous directed towards Dick Cheney? I guess that any loud sound at all would get pretty irritating when you’re freezing in chains in a dark room somewhere.

Note to our friends with their fingers on the red play buttons:  if hated al-Qaeda mouthpiece Adam Gadahn, aka Azzam the American, is ever captured, somebody should remember that the guy reviewed Autopsy and General Surgery albums for a death metal fanzine in the early ’90s.