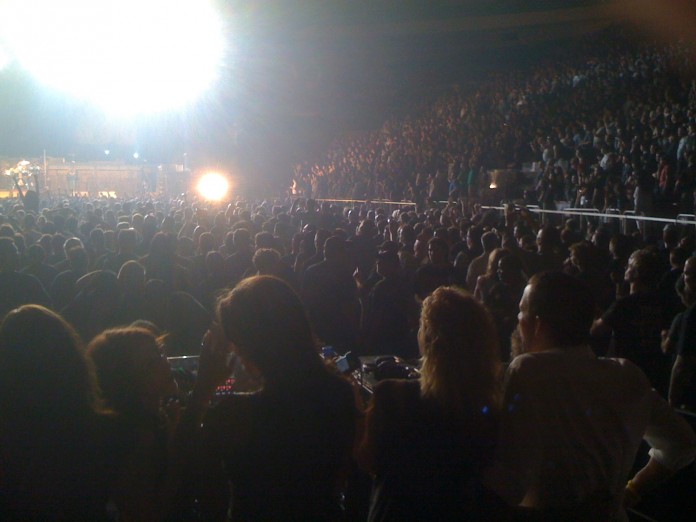 Check it out: the two heads on the right of this row of people being astonished by Iron Maiden at Madison Square Garden belong to Kate Hudson and Lance Armstrong. No joke. They made out throughout “Iron Maiden,” but never nude. If they thought the gossip rags would pick up on it…well, here you go!

I bought tickets yesterday on the cheap, and I’m so glad I did. Iron Maiden are unique among major rock bands in that they’ve never forgotten why they’re big. They work the same vein that paid off for them first in 1983, only now in more elaborate ways. And after seeing Van Halen and the Who multiple times in the past couple years for various reasons, Iron Maiden comes off looking and sounding much more impressive. I was proud to be part of a crowd of newly-minted 12-year-old Maiden fans and their equally proud doddering old dads. Best off-Broadway spectacular ever! And fastest costume changes on the old Bruce.

There was a weird incident — midway through “Powerslave,” the sound cut out altogether. The band shrugged their shoulders, looked at each other, and then began kicking a soccer ball around. This went on for at least ten minutes, and believe me the audience barely minded seeing this improvised spectacle. At one point, Bruce picked up a sarcophagus and used it to beat back the soccer ball. Funny stuff. When the power came on, he surprised me by blaming Sharon Osbourne by name in front of the massive crowd, saying she was getting her revenge and that the “wicked witch of west rides again.” Is that British humor, or does he have reason to think Sharon Osbourne still reaching out from afar fucking with Iron Maiden shows?