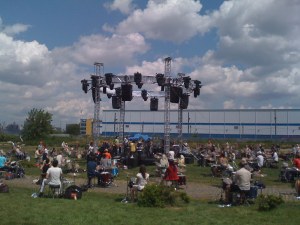 Wowwowpowpow. Tonight, 8/8/08, at 8:08pm, at the end of North 8th Street, the Brooklyn wing of the Boredoms’ cosmic 88BoaDrum event will flap. Basically, this is 88 drummers playing full drum kits in unison accompanied by some cruising Can/Neu-style synth and guitar drones. It’s kind of an improvement on Glenn Branca’s guitar orchestras, though as a guitar player with experience playing Branca’s music I know that’s sacrilege. Since it’s happening about 100 yards from my front door, I crashed the rehearsal today,
and this thing is fully awesome. In broad daylight, with no audience, under a blue sky, the Empire State Building looking like a giant metronome, the earth was rumbling, and 176 drumsticks flashed together under the noon day sun. And after seeing some of China’s Olympic opening spectacle earlier today, my appetite for a massive unison display of mechanoid human performance was satisfied. By way of juxtaposition, tomorrow I get to see Motörhead–a living monument in honor of individualism.