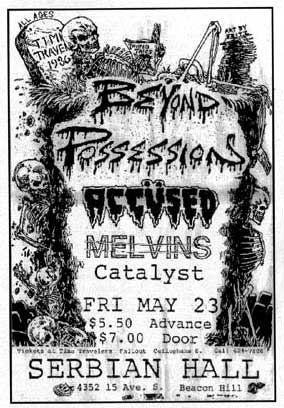 Beyond Possession from Calgary, Canada, have at least one molecule of a legacy, thanks to a legendary punk 7″, an album on Death/Metal Blade, and a smattering of mid-1980s compilation appearances. But in the opinion of me and the impulse that makes me jump seven feet in the air every time I hear it, the band’s 1985 demo rips the rest of their catalog and most other attempts at punk/metal thrash to shreds. Short and to the point, here are three songs in five minutes that stand alongside Seattle’s The Accüsed and Oxnard’s Dr. Know as some of the coolest, sickest music of its day. There’s even a kind of hectic early Voïvod psychosis going on here–yes, Beyond Possession are that good. No Ed Repka artwork, no bullet belts, no colored vinyl, no puffy white sneakers, this is just horror, speed, and great songs; everything that made frantic thrash metal work on a gut level.

Thanks to Punkhistorycanada.ca for scanning the band history included in this download from the Beyond Possession – Repossessed 1985-1989 CD, which is itself impossible to find and does not contain these songs. Lots of funny facts there, including a mention of a Beyond Possession poster hanging in the bedroom of former Melvins roadie Kurt Cobain.

What do you think? See you back here in five minutes.