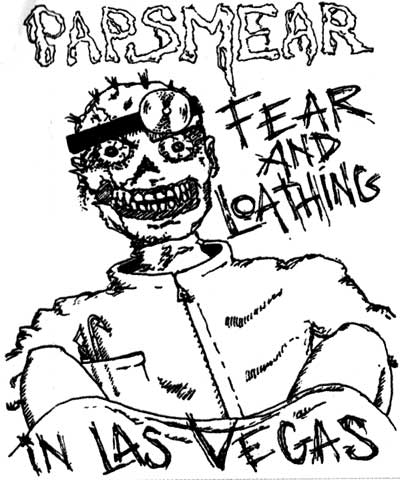 Look who’s gross now! Las Vegas sleazers Papsmear were the go-to local band for crossover acts touring across the desert during the key year of 1986. I don’t think anybody took these guys too seriously, but along the way they played seminal shows opening for Hirax, C.O.C., and Dark Angel, paving the way for more mass mayhemic destruction in Vegas by Goatlord and more importantly Righteous Pigs a year or two later. Papsmear released five demos between 1987-1992 of comically disgusting Slayer/Kreator thrash that showed they were paying attention. Then, because they hailed from Nevada where nobody could figure out how to give them a record deal, they split. Original vocalist Tony Costanza went on to play drums in Machine Head and Crowbar, and more recently the Dave Chandler/Ron Holzner project Debris Inc.

Fortunately, I can move these demos off my short list to post here on blog.bazillionpoints.com because the first two tapes, a pair of 1986 and 1988 live shows, and a historically precious trio of 1986 live camcorder videos have just been released on a CD/DVD set called Music to Kill By. It’s taken a while, for fortunately for the Paps one of their early fans, Marco Barbieri, recently returned to Vegas after a lengthy, and I mean lengthy spell working at Century Media Records.

The tapes are out of the closet, the liner notes by Barbieri are installed, the bonus DVD is authored, and the fold-out collage of LVNV thrasher kids in Wehrmacht and Life Sentence shirts drinking beer in the desert is choice. Here’s what they sounded like:

Metal War Productions. Why they don’t have any teaser videos on YouTube yet is beyond me!

UPDATE [03-05-12]: The Metal War site has vanished, but looking around a little it seems like several sellers are offering Music to Kill By cheap AT THIS LOCATION.