Home DEMO ARCHIVE Demonax: Never Heard, No Not a Sound 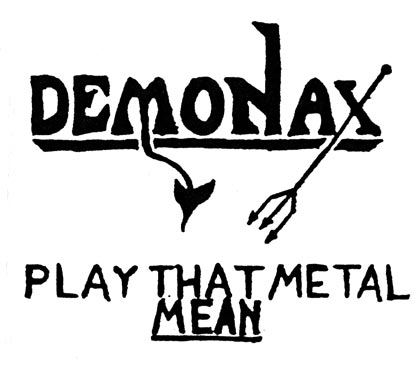 I’ve been listening to a lot of Diamond Head and NWOBHM singles lately, maybe that’s why this molten metal 1985 demo from Connecticut’s Demonax sounds so crisp and nuanced. Demonax play innocent metal for metal’s sake, driven by the joyful guitars of future Fates Warning axeman Frank Aresti, a confident double-bass drum rumble, and killer snotty low-octave singing by one Keith Bycholski. It’s rare to hear American vocalists from this Maiden/Priest/Saxon continuum that didn’t try piercing the stratosphere in honor of Halford and Dickinson, but Bycholski barks it out through bared teeth, sorta like the dude from Razor.

On “Underground,” this well-produced tape speaks for all metal demos everywhere, decrying how nobody gives unknown bands a chance, nobody wants to listen, the bands are kicking ass without a care of being paid, just getting on stage and playing that metal mean, and so on… But behold this prophecy! “There will be a day, all across the land, we’ll be together, hand in hand.” Yes, it’s true, independent labels soon formed in the States, quality bands like Demonax were signed, and the rest is history–but unfortunately not part of their story.

A full-length Demonax retrospective was released in 2001 by the sadly-defunct OPM Records, as part of a retrospective campaign that also included likeminded acts Deuce, Tension, and Commandment. There’s one copy on eBay right now if you’re hungry enough!