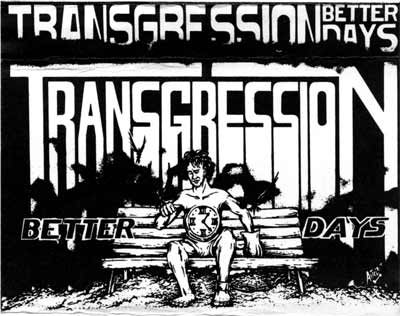 When I was 14 I had it all — a weekly metal radio show on a college radio station that reached Rochester, Syracuse, and Ithaca (don’t discount Ithaca, S.O.D. were recording there!); an excellent wheelchair weed connection; a Colecovision; every Venom and Exciter album; a hard-rehearsing band that played Van Halen, Sabbath, and Dio covers; a New York State Regents diploma in view; and a grocery store within walking distance where we could surreptitiously watch Eric Adams from Manowar slice bologna behind the meat counter. Life was very good, all things considered. And then my Mom moved our family to Indiana—suck city. Let’s just say I soon grew numb surviving a storm of alienation, pain, aggravation, and frustration.

Three years later, after escaping at age 16 to live near metal mecca Montreal for a while, I was back in Indiana. Same forecast. But I started hearing about a bunch of skate punks who hung out in the Broad Ripple neighborhood of Indianapolis begging for spare change. Apparently they had a metalcore band, and had recorded a demo. That alone was notable — the few punk or harder edged rock bands in Indiana were oblivious to the trading scene. But Transgression were hip.

Befitting a city whose outcasts were mostly brutalized loners, Transgression combined hardcore punk, skinhead, and thrash metal style and music, and they now deserve a higher profile for their originality. In 1987-88, the era of knockoff thrash and death metal wannabes, Transgression concocted an unthinkably tuneful mixture of the hooks of SNFU and the blur of Cryptic Slaughter.Their great Cold World album on Manic Ears, the label that paved the way for Earache, is an overlooked gem, but this demo with one different guitarist is also pretty good. Like the record it features artwork by tattoo legend Guy Aitchison, and was produced by Paul Mahern of the Zero Boys — the Indy pioneer who also captured Italian hardcore act Raw Power’s classic releases.

Transgression has regrouped once or twice in recent years minus singer Paul Linhart, who was kind of an innocent 17-year old version of Mike D. Williams from Eyehategod. And a good lyricist! The guitarists Dino and John Zeps are at least still active in Indianapolis bands, and there’s a lot of visual evidence on the posthumous MySpace of Transgression trying out fancy big city hairstyles, sharing bills with Holy Terror and D.R.I., and palling around with Seth Putnam in 1988.