Home Ian Christe Thor vs. Cronos of Venom: When Pantera Was a Buxom Babe 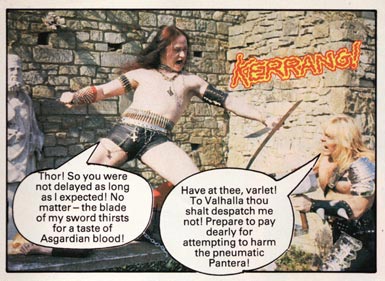 Last weekend I was digging out Hanoi Rocks articles from old Kerrang!s to include as  backstory with Bazillion Points’ upcoming press mailing  of Andy McCoy’s autobiography. I got sidetracked looking for this long-lost photocomic battle between Cronos and Thor, the historic details of which must now immediately be brought to light.

Firstly, this bout ‘tween the “God of Thunder” and “Venom’s Black Metal King” leaves no question about the show business side of heavy metal in its peak years. Cronos looks evil as ever crawling over a castle ruin in his leather underwear—but he’s battling a force of good in a Crazy magazine-style realm laced with bad puns and fake blood! That the battle is waged over Thor’s wife Pantera reminds me that she was the most famous Pantera in heavy metal until about 1991.