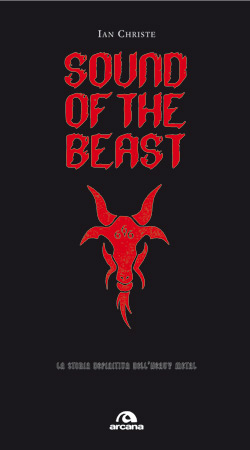 My Italian publisher Arcana Edizioni has just released SOUND OF THE BEAST: La storia definitiva dell’heavy metal, available wherever Italian books are sold. Five years have passed since the core manuscript of Sound of the Beast has been updated, and since the worlds of metal have hardly been dormant in that time, Arcana wisely thought it would be a good idea if I could briefly recap some recent events. I was happy to do that, and I’ll repost those thoughts here in draft form in the near future. If you capiscono l’italiano, you can read the 2009 portion of the book HERE, thanks to la Repubblica XL.

Unfortunately, the book doesn’t include my hand-tailored Italian thanks list to people who have been great friends, hosts, and inspirations over the years, so a special million thanks to: Dianna Dilworth Christe, Enzo Mazzeo and Grind Zone, maestro Fabio Frizzi, M. Cristina Vanza, Adam Chapman, Sarah Manguso, the American Academy in Rome, Claudio Simonetti, Bulldozer, Raw Power, and all the knife-wielding, zombie-chasing, bright-red blooded Italian film directors who have inspired heavy metal for decades.