Home Bazillion Points Books Hellhammer 01.01.10—And the Year of the Warrior Begins 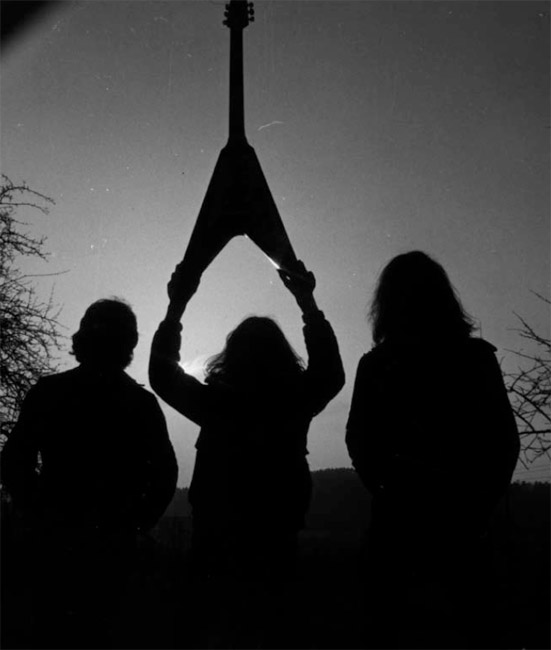 Bazillion Points Books is very proud to announce that pre-orders will be accepted beginning January 1, 2010 for the massive hardcover book Only Death Is Real: An Illustrated History of Hellhammer and Early Celtic Frost, by Tom Gabriel Fischer with Martin Eric Ain. These books will ship worldwide in March 2010. For more information and to place orders, visit Bazillion Points Books.

This formidable oversized hardcover runs 288 pages (including a 32-page color section), and combines hundreds of unseen early Hellhammer and Celtic Frost photos with a vast treasure trove of artwork and memorabilia. A substantial written component by Fischer details his upbringing on the outskirts of Zurich, Switzerland, and the hardships and triumphs he faced bringing his groundbreaking bands Hellhammer and eventually Celtic Frost to reality. In addition, the book includes an introduction by Nocturno Culto of Norwegian black metal act Darkthrone, and a foreword by noted British author Joel McIver.

Significantly, the pre-order date of January 1 marks the anniversary of the first Hellhammer photo session in 1983, and also kicks off a new year which will bring the debut release by Fischer’s new band Triptykon, along with his much-anticipated featured role as guest curator at Holland’s respected Roadburn Festival.

According to Fischer: “The earliest existing photos of Hellhammer were taken exactly 27 years ago, on January 1, 1983. At that date, I found myself at the dawn of a new period in my life, much as I do today. On that first day of 1983, we in Hellhammer conducted the first proper photo session as a band, at the tiny farm village of Birchwil, Switzerland. The year that had just begun would also see the recording sessions and release of Hellhammer’s three demo cassettes, possibly the most important and enduring aspect of Hellhammer’s legacy.”

“Now, on this first day of 2010, I am yet again embarking on a new stage of the path that is my life. I am once more part of a new group, Triptykon, and this year will see the release of our first album, Eparistera Daimones. It is coincidental, but no less significant, that this release will be preceded by the publication of Only Death Is Real, the book chronicling the very beginning of this path.”

Says Bazillion Points publisher Ian Christe: “There is no question that this book goes farther than any other source in exploring the origins of underground heavy metal. The wealth of visual information is astounding, both in terms of documenting early 1980s headbangers and exposing the still-relevant imagery of the first Hellhammer and Celtic Frost photo sessions over 20 years ago. On top of that, the written chapters combine Tom Fischer’s vivid stories with lengthy quotes from Martin Eric Ain and the other main Hellhammer members, all explaining in highly personal terms how and why extreme metal was born. I could not be prouder to play a role in making this remarkable book a reality.”

States Fischer: “This is a book about the real Hellhammer, the essence of that group, the aura it carried, and the truly unique spirit of revolution of the times in which it existed. It is a book about a group of outcasts—about persistence, dedication, and an utterly personal vision. I have worked very hard to make sure it will do justice to the work of a number of very unique people who shared the same ideas at a very unique point in time.”