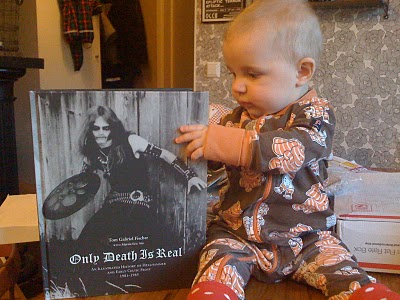 The book has been a long time coming in the eyes of Hellhammer fans, but in the big picture it’s a minor miracle the book exists at all. What other forms of music have a figure like Tom Gabriel Fischer? He labored for years to collect the hundreds of photos on display here, to gather memories from his long ago bandmates and then reassemble the story of his often painful boyhood, in order to tell the tale of personal transition, and of the birth of entirely new genres of music. His writing is excellent—precise and unflinching, and although this is an illustrated history, Bazillion Points would have gladly published the unaccompanied text in plain black and white.

Personally, Hellhammer was a gateway to underground metal for me, at least as far as underground metal existed before Hellhammer. I read about the band in Kick*Ass Monthly as a 14-year old, and was attracted to the band’s visual mystique and Bob Muldowney’s hard-wrought descriptions of the band’s unique abrasive metal. (In fact, Only Death Is Real is dedicated to the memory of three persons, including the late Kick*Ass editor Muldowney). Hellhammer’s “Crucifixion” tortured my ears and opened the gates for the soon-to-come sounds of Cryptic Slaughter, Death, and Morbid Angel. So much metal history has sprung from those early desperate notes, but I believe this book is much more than that.

I’m honestly kind of exhausted from shuffling hundreds of 40-pound boxes of Hellhammer books around over the past several weeks. So I’m laughing giddily at the Only Death Is Real contest concocted by my dear friend Christoffer in Stockholm. First, learn Swedish, and then read his high praise for the book. Next, guess the weight of Olivia Obliteration and possibly win yourself a copy! Or at least enjoy the juicy photos… And by the way, Hellhammer is definitely not “for the Hitler.” Read the text, enjoy the book, and marvel at the tale of our people’s struggle.