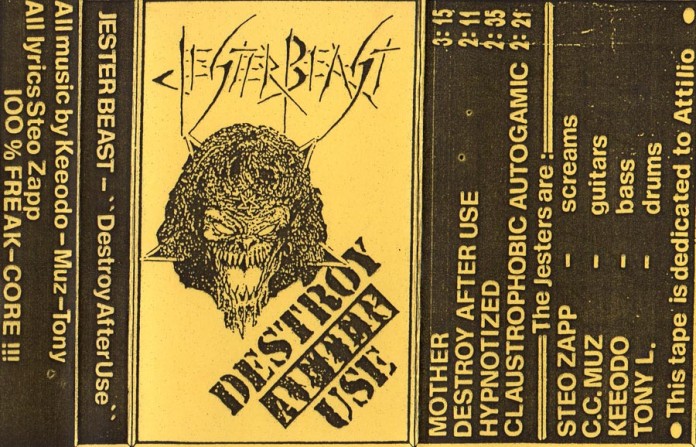 Long time no demo! Bazillion Points Books has demanded a gargantuan share of my time for the past two years, but in truth the demo flow here has slacked due to interior forces—I admit I’ve been flicking out links and observations faster via Facebook and Twitter, and exterior forces—the proliferation of demo blogs since Bazillion Points began in a magnetic tape near-vacuum several years ago. Well, I had a fistfight with myself and I won, and I’m re-committed to regularly posting demos from the massive stash here. (Besides, did you really already download the 50 previous submissions, you lazy, selfish fuck?)

Let’s get back on track with Jester Beast, an Italian thrashcore foursome from Turin who identified themselves as “100% FREAK-CORE!!!” These characters actually debuted in a more traditional heavy metal configuration in the mid-1980s, but after their guitarist was killed accidentally, they regrouped in this dedicated high-speed thrash assault.

With nods to Voivod and Italian hardcore acts like Wretched, Negazione, and Raw Power, this demo has plenty of the rare nuclear-powered chaotic energy that is so difficult to capture. And though the band has a pretty weak chicken-bone logo, their mascot just rules—like Eddie from the cover of Killers after swallowing the early Legacy/Testament mascot. I appreciate bands like these guys and Assassin from Germany, who were way too far off in a blazing thrash direction to notice the grinding happenings up in Great Britain in 1988. It’s a far advanced form of thrash that doesn’t get enough play.

As luck has it, Jester Beast is playing two shows in Italy in June 2010—that’s June 5 in Cremona with Concrete Sox and the great Children of Technology, and June 12 in Torino with ex-Voivod band E-Force—with a half-original lineup retaining screamer “Steo Zapp” and guitarist “C.C. Muz.”

And according to the Jester Beast MySpace, hell yes they are still 100% FREAK-CORE!!!