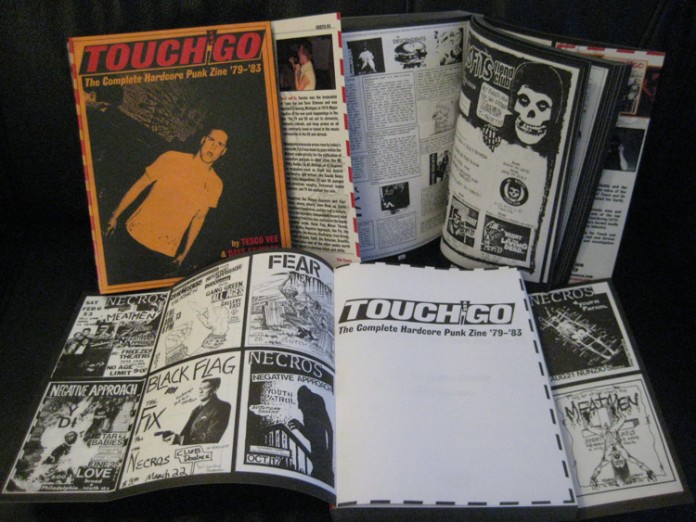 New arrival today at Bazillion Points HQ, as the printer sent us the first dripping wet samples of Touch and Go: The Complete Hardcore Punk Zine ’79-’83. If anything, they did too good a job hiding the 576-page girth of this beast in a deceptive one-and-a-quarter inch thickness, but you can feel the heft in your wrist when you shake the thing. Tesco Vee and Dave Stimson and editor Steve Miller’s book is an incredible eye-level archive of the first sprouts and eventual blossoming of hardcore punk in America. I mean, where were you in ’79, when the dam began to burst?

TV and DS were in Lansing fucking Michigan, listening to X and 999 and waiting for Reagan to take office. Already major music fiends, they got the punk bug, and inspired by Slash they huddled around the Xerox machine with glue and scissors and got to work. Their Touch and Go fanzine was a tiny crowbar that opened up a crack in the universe for anything weird and now revered, and the on-the-spot and on-the-mark reviews of crucial records by the Fall, Crisis, Pagans, Crass, Discharge, U2, the Cure, and hundreds of others (including Venom, Accept, Acid, and Blitzkrieg, hells yeah!) are alone worth the price of admission, just to make sure you aren’t suckered by nostalgia or a case of historical revisionism by someone who wasn’t there.

But the meat of matter is of course the acidic essays and wise-ass interviews with usually unknown up-and-comers like the Effigies, Necros, Void, Crucifix, Minor Threat, SSD, Negative Approach, Misfits, Youth Brigade, Iron Cross, Scream, the Minutemen, Battalion of Saints, Bad Religion, 7 Seconds, and countless others.

While sure to improve the profiles of essential U.S. hardcore bands the Fix, Necros, Meatmen, Negative Approach, and honorary Midwest bands (read non-LA or NYC) like Misfits or Minor Threat, the bleak Midwestern humor shines through:

TV: One glance at your lyrics, and it’s apparent that you aren’t much on booze and drugs.
IAN MACKAYE: I’m totally anti-drug and alcohol.
TV: In Lansing drinking is somewhat of a necessity.

The ever-gentle and considerate MacKaye goes on to describe hitting a kid with a hammer who blew pot smoke in his face, but I’ll leave that up to you to discover on your own. There will never be another book like this about hardcore, because these guys were ground correspondents and active participants during the incubation and invasion period. They not only wrote the zine, they booked the shows, they started the bands, and eventually they launched Touch and Go Records, a cornerstone of indie record labels to this day.

Go ahead and start a riot in your eyes with the fresh photos posted at the book site:

Just don’t let your impressionable children take the book to show and tell—there are lots of wobbly penises, Xeroxed vaginas, and curly brown shapes in between all the bald heads and white T-shirts. Who else but Tesco Vee would put tit torture pics into a zine dedicated to 999??