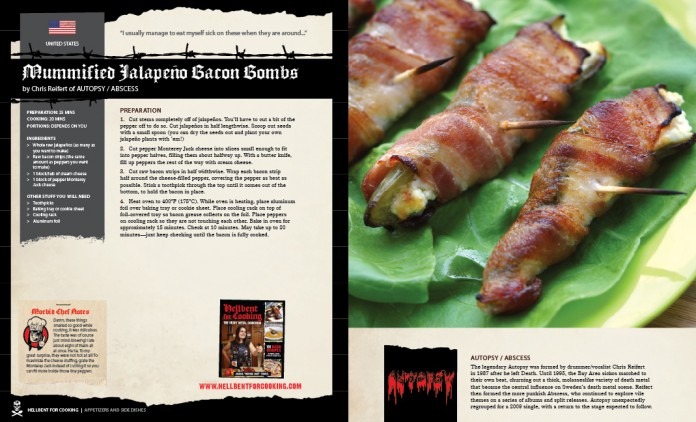 Since the release of Annick Giroux’s ingenious Hellbent for Cooking: The Heavy Metal Cookbook, a popular outcry has clamored for sample recipes from the book. Part of the problem with that has been selecting one stellar recipe from among the hundred-plus dishes on display. So here’s a simple solution—check out the lead-off recipe from the Appetizers section, the first blast of culinary warfare on display. Voila! Chris Reifert of AUTOPSY’s simple but deadly masterpiece: Mummified Jalapeño Bacon Bombs.

As Reifert himself says: “I usually manage to eat myself sick on these when they are around.” I can vouch for that on my end—at least three times I’ve exceeded the recommended dosage, and suffered happily.

Click above to enlarge, expand, print, duplicate, share, and serve. For more info on Annick’s book, with its 101 recipes from 32 countries, including bands like Thin Lizzy, Trouble, Mayhem, Gorgoroth, Accept, Slough Feg, The Gates of Slumber, Anthrax, Sepultura, Gwar, Sigh, and many many more… CLICK HERE for http://www.hellbentforcooking.com .

And while you’re struck helpless by Reifert’s masterful bacon bombs, squirm over to the resurrected Autopsy’s MySpace site for new music and info on their upcoming 2011 album, Macabre Eternal.