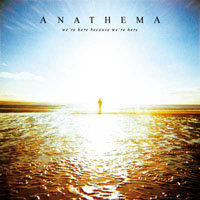 This is the first in a series of 2,112 blogs by Jeff Wagner regarding all things related to the peculiar subject of his book, Mean Deviation – Four Decades of Progressive Heavy Metal.

German magazine Der Spiegel recently ran an interview with author and all-around intellectual smartypants Umberto Eco. His current exhibition at the Louvre (never heard of it) focuses on the nature of lists in human history and what list-making means. The headline to the article quotes the man: “We like lists because we don’t want to die.” Early in the interview, Eco asks “What does culture want?,” answering his own question with: “To make infinity comprehensible.”

I like it because, sometimes, when I’m nestled in the dark of my music room (colloquially dubbed a “mancave”), inescapably tuned into a  particular album, that’s exactly what I feel like I’m doing: comprehending infinity. Or getting close. It doesn’t happen often, but the albums below helped me almost get there. The Anathema actually landed me right on Planet Infinity a few times.

10. Cynic – Re-Traced — It may be an EP, and 4 of the 5 songs are re-imaginings of Traced in Air songs. Maybe that’s why I like this so much: Cynic moves everything forward and further (not just Aeon Spoke-izing these songs, as some critics have suggested), making old material seem completely brand new. Truly new song, “Wheels Within Wheels,” is great promise of future Cynicisms.

9. Canvas Solaris – Irradiance — From what I understand, this may be the final Canvas Solaris album. If so, they’ve gone out in a blaze of, well, irradiance. Forget Scale The Summit, this is where it’s at.

8. Dax Riggs – Say Goodnight to the World — Slicker and more produced than previous Dax material, including his pre-solo Deadboy & the Elephantmen stuff. Still think this guy should be Johnny Cash-huge…or at least Ryan Adams-huge.

7. Enslaved – Axioma Ethica Odini — Despite my feeling that Enslaved have outgrown harsh vocals, and my hunch that they’re utilizing them only because they feel expected to, this album is one of the strongest in their huge discography. Its second half is the best group of songs in their catalog.

6. Deathspell Omega – Paracletus — Still cannot imagine how mere human beings can come up with music like this. Truly progressive metal. A little less dissonant than their previous album, the songs are shorter, but no less epic. Mindblowing.

5. Deftones – Diamond Eyes — Never  had much use for nu-metal, but then Deftones haven’t been nu-metal for well over a decade. Got into 2000’s White Pony, then, for some dumb reason, didn’t pay attention to successive albums until this year, when a friend turned me onto this and the insanely brilliant Saturday Night Wrist. I am hooked.

4. Circa Survive – Blue Sky Noise — The almost psychedelic wash of guitars, commanding voice (as long as you like high-pitched male vocals, and goddamit I do), and ferociously infectious melodies on this album are undeniable. I’ve been interested since their first album, and they just keep getting better and better.

3. Atheist – Jupiter — You have to keep expectations low when any metal band from the old days returns, but Jupiter sounds to me like the fourth Atheist album might have done had it come out in 1995 instead of 2010. Of course, its production is modern, maybe too much so, but that doesn’t disguise the fact that this is 100% Atheist. I hope they add more dynamics and textures next album, because it’s almost too intense.

2. Solefald – Norron Livskunst — Although the preceding album, Black for Death, was fine, it seemed to signal that Solefald were running out of ideas. Not so. This, their seventh album, comes from a re-inspired duo who have written and recorded an album as vital and interesting as their lauded debut of so long ago. I’ve even been wondering if this might just be the best Solefald of ’em all. Crazy…

1. Anathema – We’re Here Because We’re Here — Right up there with the band’s Eternity and Judgement albums. I didn’t think they still had this kind of album in them, but they do. Far and away my favorite album of 2010.

But the problem with lists is they’re arbitrary. They can and will change. This one already has, in a way, because I’ve recently gotten very much into Minus the Bear’s Omni. And if Ihsahn’s After isn’t on the list, does that mean I didn’t like it? Nope. And maybe that Atheist album will lose some luster over time. These things happen. Stranger things…stranger things.

Next post: My unpublished interview with Nunslaughter’s Don of the Dead on the worth—or worthlessness?—of progressive metal… Or a list of my favorite Umberto Eco writings.