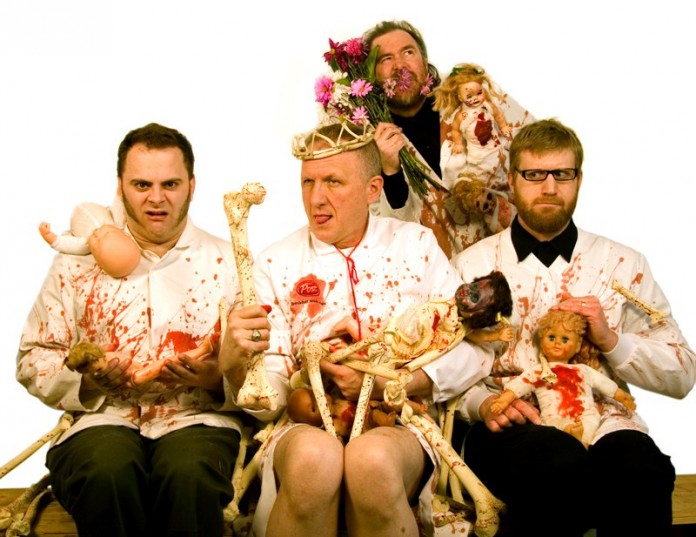 In 2010, Bazillion Points Books released Tesco Vee and Dave Stimson’s 574-page tour de force TOUCH AND GO: The Complete Hardcore Punk Zine ’79-’83, garnering hosannahs from the hoi polloi of hardcore and year-end kudos from Decibel, Spin, Pitchfork, Crawdaddy, and dozens more. This April, like a boogeyman leaping to life from the pages of an adults-only bedside pulp novel, the Dutch Hercules himself Tesco Vee and his merry band of Meatmen return to wreak havoc and return to action the primal offensive creative force that gave birth to Touch and Go magazine, Touch and Go Records, and the sweaty armpits of hardcore punk itself. For the entire month of April 2011, Tesco will be terrorizing West Coast book and record stores by day, telling the tales of Rollins, MacKaye, Danzig, and the dawn of the hardcore punk; and by night showing grimy punk dives how it’s done with full-color four-dimensional performances by Detroit daddies The Meatmen.In a time before hardcore punk had a name, when GG Allin still sang love songs, before S.O.D. were even stormtroopers, while Gwar were still in Antarctica, Tesco Vee and the Meatmen made sausage from sacred cows. Their horny rants and death dirges sparked protests from every manner of two-legged beast. Now in feather boas and Abba clogs, the platinum topped Tesco Vee still commands a fiercely funny presence with a bag of tricks, props, and costume changes that will make Henry Rollins blush and send Lady Gaga shopping.

Says Tesco: “It is extremely cockle-of-the heart-warming that I can further pimp the Touch and Go tome by day, and rock out with the Meatboys by night. This bestselling brick of a  book transcends one mortal man, but as half of the braintrust of this punk rock manifesto, who better than to lather the legend than me, Tesco Vee? I will give the punters what they want: Danzig anecdotes, tales of record collecting forays, invaluable autographs on their books, photo ops, illicit gropings, you name it!  Just bring your bad selves, your dad’s old toys, and a couple sheckles to these in-stores, and we’ll take it from there. As my man Don Cornelius used to say: ‘It’ll be a stone gas, baby!'”