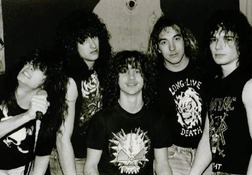 Congrats to Rob Barrett of Cannibal Corpse, who has found a wonderful woman to marry him and is jumping at the chance to tie the knot tightly. The future Irina Barrett obviously sees beyond the blood red herrings of the band’s lyrics and loves the beast inside. Instead of a traditional reception with a Journey cover band, Rob lined up a bunch of band reunions, basically resurrecting the late ’80s Buffalo, NY, metal underground. Originally the fun was to be limited to family and friends, and the wedding guest list probably encompasses most of the old-timers, anyway, but just in case anyone else wants to climb out of the woodwork, this is now a public happening.

Friday, January 11, 2013
Concert to celebrate the wedding of Rob and Irina Barrett, featuring: