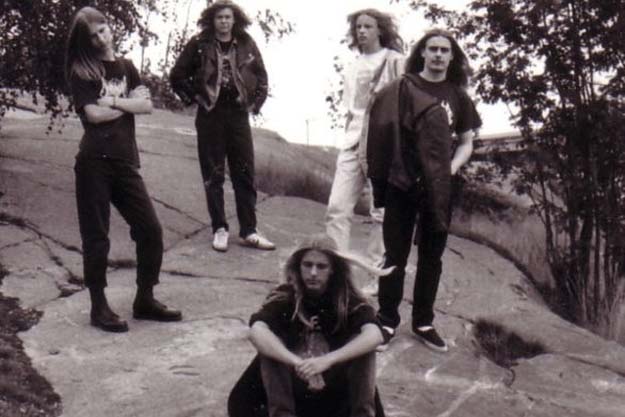 To call Daniel Ekeroth’s super-thick brick of a book, Swedish Death Metal, ambitious would be the mother of all understatements. The keen-eyed author paints a picture where every stroke of the brush is vital and no stone is left unturned. Just when you think you’ve drunk your last drop of stories about underground parties, train rides of the damned, and very real bombings, Ekeroth hits you with his index—a mind-blowing vortex of over a thousand death metal bands from Sweden. Once you realize it is doubtful that more than maybe two demos from the whole scene are missing, you start to get cold sweats.

Since we are all for cultural enlightenment and educating the masses around here, please join us in delving into this unique treasure trove of metal. First in a series of kick-ass Swedish death metal band profiles from the Swedish Death Metal A–Z section is one of the best tribes we could think of though they still dwell in relative obscurity: GOREMENT!

“This Nyköping band started as a thrash metal combo in 1989, but soon changed radically into an extremely brutal death metal platoon with guttural, low pitched vocals. Gorement was hailed in the early ’90s underground, but never got anywhere. It’s a shame, because this is the real stuff. One of Sweden’s most brutal bands. Fucking great! Their old material has recently been released on CD—get it or be a wimp! Most of the band members continued in Piper’s Dawn, but that band had nothing to do with death metal, and mercifully split up after a sole demo. Note that Gorement had the same logo as Gorefest, and that one of their demos had the same cover as Morbid Angel’s Blessed are the Sick (the same Delville painting already used by Hexenhaus on their debut album.)”

One down, 999 to go! To read along with the book Swedish Death Metal, pick up a signed copy with a bonus metallic gold badge from http://www.swedishdeathmetal.com