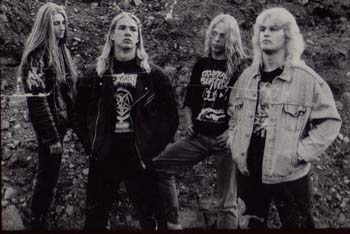 Once a week we rip open the bloodstained band appendix of Swedish death metal bands from Daniel Ekeroth’s primal book Swedish Death Metal. With over a thousand bands listed, this will be a nice nineteen-year journey. After launching our maggot-infested journey last week with Gorement, our next blood-filled tidbit is carved from the flesh of the almighty CREMATORY…

“This classic band started in the summer of 1989 in the southern Stockholm suburb Haninge. Their gore-infected style takes grind/death to the very limit, and sounds so good! Around 1990, Crematory played with Entombed, Unleashed, Therion, and Carnage. Sadly, they never had any of the success of those bands. A couple years later they folded, and they are truly missed. The vocals on their first demo are delivered by Therion’s Christoffer Johnsson. Crematory stand tall among the great old Swedish death metal acts, just a brilliant band. Most of the members went on to form the relentless grindcore act Regurgitate. Urban Skytt also joined Nasum shortly before they folded.”

Pick up a hardcover or softcover edition of Daniel Ekeroth’s book RIGHT HERE.