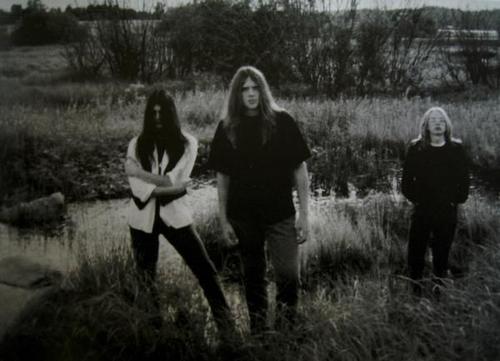 Our relentless, gory tear through the exhaustive index of bands found in Swedish Death Metal continues…

NIRVANA 2002 will be forever entwined with Daniel Ekeroth’s literary masterpiece. Not only is frontman Orvar Säfström one of the key voices in the book, but the tireless Ekeroth managed to convince these guys to reconnect and reanimate the band. Despite their hemorrhaging heaviness, Nirvana 2002 had never actually played live until the Swedish Death Metal release party!

From the book: “Four of the very best Swedish death metal bands never made an album: Interment from Avesta, Evocation from Borås, Crematory from Stockholm, and this band—Nirvana 2002 from Edsbyn. These guys started their deadly mission early, in 1988, putting them among the very first Swedish death metal bands. Initially known as Prophet 2002, they renamed themselves Nirvana in 1989. But since some inferior group from Seattle apparently had the same name, they tagged on the old “2002” to their new name. Säfström later helped Entombed with vocal duties for a short time, appearing on their Crawl EP. Sadly, Nirvana 2002 never got anywhere. Their departure is a big loss for everyone the least bit interested in old Swedish death metal. Killer riffs, powerful sound, heavy groove, and superb screaming vocals—it’s all there. I still play their demos a lot. Until recently, Säfström hosted the biggest Swedish cinema program on national television. I wish him all the best in life, on one condition: start a band again, you multi-talented bastard! Säfström and Quick were also editors of the cool Hang ’Em High ‘zine.”

For more Swedish death metal, pick up a hardcover copy of Daniel Ekeroth’s book with a bonus woven patch HERE.