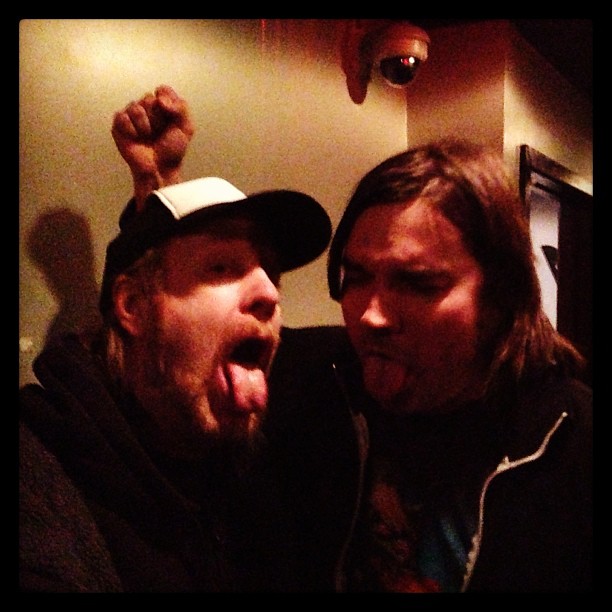 Pictured above: Some nonsense involving Tompa Lindberg of At the Gates/Grotesque and Bazillion Points publisher Ian Christe reenacting a story in METALION: The Slayer Mag Diaries about Tompa puking into a bottomless plastic bag at a party in Sarpsborg, Norway, 1000 years ago. From page 185 of the book, as Jon Kristiansen writes: “On New Year’s Eve of 1989, I knew I would be home alone. I decided to have a big party while my parents were gone. Euronymous and Dead came. Lots of people from Sweden appeared, including the Tiamat guys, Tompa Lindberg from Grotesque, and Necrolord—the guy who played in Grotesque and Liers in Wait and later did album artwork for Emperor, Bathory, and many others. Throughout the night, Dead and Tompa were cutting each other with blades. At one point, they wandered into my parents’ bedroom, dripping blood. I guess they were both trying to outdo each other, and show how extreme they were… I also remember Tompa sitting in my bed, just puking his guts out. He had a plastic bag to barf in, but the bag had no bottom, so he was basically just puking straight into my bed. Overall, it was a really messy night.”

There you go, the extreme glories of pure metal madness from the past, courtesy of METALION. Congratulations to Decibel on 100 unholy issues—and thank you for creating a scaffold for delving into the past, present, and future of all things HEAVY!