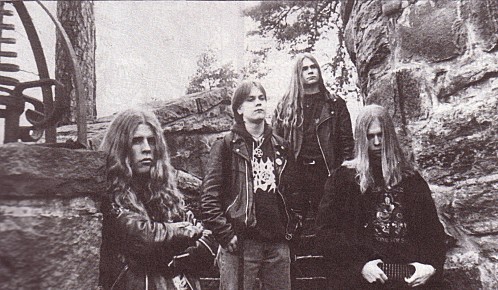 As Daniel Ekeroth’s Swedish Death Metal points out, four of the best Swedish death metal bands never released an album. Since the book’s release, both Evocation and Interment have recorded new material; Nirvana 2002 reformed to play their very first live show at the books’ release party, persuaded by the suave Ekeroth. Crematory is the only corpse yet to be reanimated. This week, our journey through the stunning band appendix of Swedish Death Metal leads us to the epitome of the sickening Swedish sound: EVOCATION!

“This Borås outfit is a great Swedish death metal band that never made it. They started in Sept. 1991 out of the ashes of Morbid Death, Harrasmentation, Forsaken Grief, and Decomposed. From the start they delivered high class Sunlight death to the bone! They may have been a little late with their classic death metal as black metal swept over the country, but I assure you Evocation can crush almost any black metal band any day! Great stuff! Saarinen and Josefsson were also in Cemetary, and Wacker and Karvola started crust punk band Rajoitus in 1993. Apparently Evocation is playing again recently, and their demos have been released on CD. Get it!”

Get a limited hardcover copy of Swedish Death Metal here with a bonus woven patch.