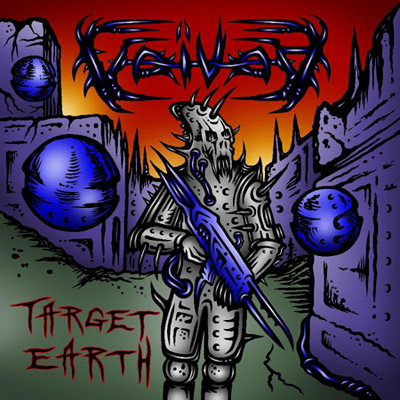 Although each and every progressive metal band of importance is dissected and analyzed in Jeff Wagner’s prog metal scripture Mean Deviation: Four Decades of Progressive Heavy Metal, the Canadian metal explorers Voivod are held up high as one of the cornerstones of forward-thinking metal. Voivod drummer Away created the book’s unique cover artwork and interior motifs. So with Voivod beaming its new Target Earth release over the world, we had to yank Jeff out of his listening cave for a deep-thinking verdict on a deep-thinking band. Here’s what Wagner says:

“Target Earth is not quite a ‘return’ to anything, because that’s not how Voivod rolls. But the record is a reinstatement of their most beloved period. The riffs are radical and plentiful, and the atmosphere is exclusively otherworldly. With a new guitarist who essentially studied under Piggy, the band delivers a fresh, edge-of-your-seat kind of listen. Target Earth is Voivod as it ever was, but totally different at the same time.”

To delve deeper into Voivod and the entire universe of progressive metal, pick up a signed copy of the book Mean Deviation!