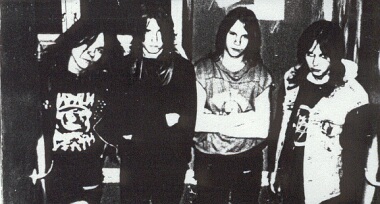 Remember the solemn faces and pubescent charms of Crypt of Kerberos? They look green as grass in that picture, we know, but believe it or not, those half-pint metalheads already had two demos under their belt at that point! This week’s pick from the index of Daniel Ekeroth’s Scandinavian saga Swedish Death Metal is Crypt of Kerberos’s precursor; a group that always had to stand in the shadow of other bands, and whose legacy dwells in relative obscurity. Perhaps the time is ripe for a renaissance? Ladies and gentlemen: MACRODEX.

From the book: “Eskilstuna band which kicked off in 1987 as the hardcore band Cruelty. (Note that two members, Jani and Jari, continued with an early version of notorious white power band Pluton Svea…unbelievable). Soon Cruelty became the fast and furious death/thrash band Macrodex. In 1989 they were among the elite of Swedish death metal, but always seemed one step behind bands like Entombed, Grave, and Merciless. After a couple thrashy death demos they mellowed out, and started writing slower stuff. Due to musical disagreements, the group soon dissolved, splitting into Crypt of Kerberos and House of Usher. Harri Mänty is now in Kent, Sweden’s biggest Pop band!”