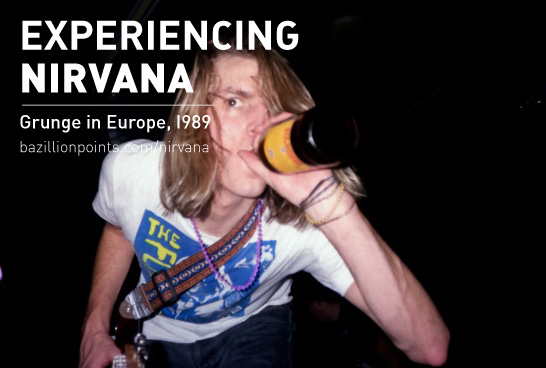 Extra, extra, read all about it! This most year’s immersive and authoritative account of the rise of a wild breed of rock music will come courtesy of Bazillion Points and Sub Pop cofounder Bruce Pavitt. Read on!

Bazillion Points Books is proud to announce the October 2013 trade hardcover release of EXPERIENCING NIRVANA: Grunge in Europe, 1989 [ISBN 978-1-935950-10-3]. This intimate photo journal and wild grunge rock micro-history was shot and written by Bruce Pavitt, co-founder of Sub Pop Recs., the legendary Seattle label that signed Nirvana in 1988. The book features over 200 picturesque and candid full-color photos shot by Pavitt over a tumultuous one-week period on tour from Rome to London with Nirvana, TAD, and Mudhoney.

On November 27, 1989, Bruce Pavitt and his Sub Pop partner Jon Poneman arrived in Rome to meet Nirvana, as the band was nearing the finish of a grueling six week tour of Europe. While determined to promote their grungy, riff-heavy debut album, Bleach, Nirvana’s travels with fellow Sub Pop act TAD had left them exhausted. Pavitt and Poneman did their best to revive the spirits of frustrated and downcast Nirvana bandleader Kurt Cobain. While he nearly leapt from a 14-foot speaker tower one night, and then had his passport stolen, Cobain managed to continue to London, where Nirvana played the most important show of its young career.

The band’s breakthrough performance at the 2,000-capacity Astoria Theatre, London, was meant to be a warm-up for sets by labelmates and hometown Seattle heroes Tad and Mudhoney. Openers Nirvana won over the crowd and changed the band’s fate, as the then-powerful London music press proclaimed Nirvana: “Sub Pop’s answer to the Beatles.” Afterword, world attention increased dramatically, setting the stage for the 1990s, when Nirvana became the most important band of the decade. Incredibly, Bruce Pavitt was there, photographing the events onstage and off, and documenting the details in the hours before fame came calling.

Nearly twenty-five years later, Bruce Pavitt has opened this treasure trove to the public. Says Pavitt: “I put a lot of heart into this grunge rock ‘microhistory’. I’m honored to be collaborating with Bazillion Points on a hardcover edition of this project.”