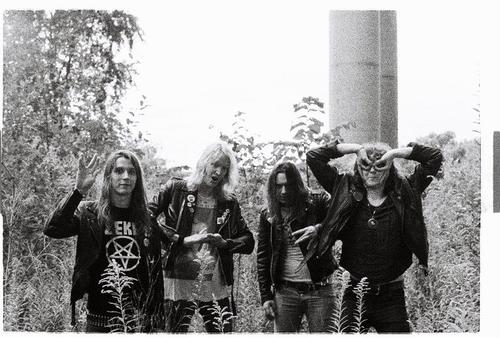 In the decades since Entombed, Dismember, At the Gates, and 1000 other Swedish death metal bands destroyed the landscape, their devastating sounds have been imitated but never surpassed. In collaboration with Swedish Death Metal author Daniel Ekeroth and Decibel Magazine, this week host Ian Christe (Sound of the Beast) hunts down and collects an hour of the most caustic death metal reprobates currently scorching their native soil. Grab a shotgun and a shovel, and prepare for the grave-ripping sounds of Invidious, Repugnant, Necrovation, Tribulation, Decapitation, Stench, Morbus Chron, Bastard Priest, Repuked, and more! Veta dina rötter!

Tribulation – “Sacrilegious darkness” from The Horror
Repugnant – “From Beyond The Grave” from Epitome Of Darkness
Bastard Priest – “Ghouls Of The Endless Night” from Ghouls Of The Endless Night
Affecti Veternus – “Contradicted Trinity” from The Might of the Meat
Invidious – “Throne Of Death” from In Death
Morbus Chron – “Ways Of Torture” from Sleepers In The Rift
Maim – “From The Womb To The Tomb” from From The Womb To The Tomb
Necrovation – “Death Salvation” from Breed Deadness Blood
Stench – “Stench of Death” from Reborn in Morbidity
Vanhelgd – “Mansklighetens Finala Ruin” from Church Of Death
Decapitation – “Undead Carnage” from Undead Carnage
Morbid Insulter – “The Abomination’s Curse” from Thundering Evil
Repuked – “Gag!” from Pervertopia