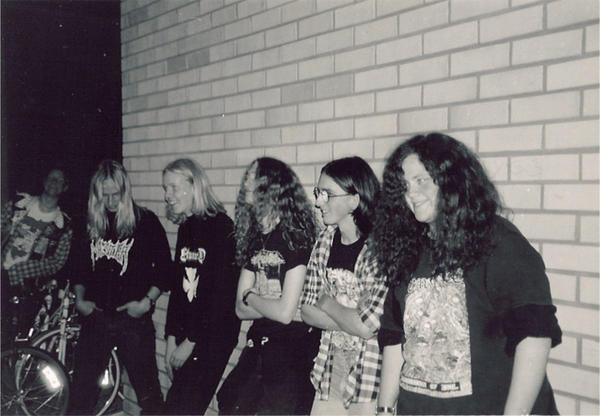 The top reason that death metal bands in late ’80s Sweden split seems to have been to get rid of unwelcome bandmates. In the cases of Nihilist/Entombed and Corpse/Grave, both groups ceased to exist for just a few days, before reforming almost instantly hoping the guy who was indirectly fired wouldn’t notice. (It didn’t work, they always noticed.) The guys in Macabre End pulled this stunt, but they simply switched one word and kept on going. From the ashes of Macabre End rose GOD MACABRE, every bit as good musically as their forerunner.

From the band index of Daniel Ekeroth’s Swedish Death Metal: “In 1991, Karlstad’s Macabre End wanted to get rid of their bass player, so—like Nihilist a couple of years earlier—they disbanded, only to start up again soon after under a new name without telling the unwelcome bandmate. As God Macabre they continued with dark and intense death metal, incorporating some daring and progressive elements such as a Mellotron. Though quite big in the underground for some time, they never really made it. One reason was that their one record wasn’t released until two years after it was recorded. In 1993 they called it a day. Stålhammar went on to join Utumno [and now At the Gates]. In retrospect, they probably should have kept their old name to keep their audience. Still, a prime example of true Swedish death metal. God Macabre’s sole album was re-mixed, re-edited and re-released by Relapse in 2002 [and again in 2008]. (The CD also includes Macabre End’s demo).”

For 1001 stories from the birth and rise of Swedish death metal, check out Daniel’s landmark book RIGHT HERE.