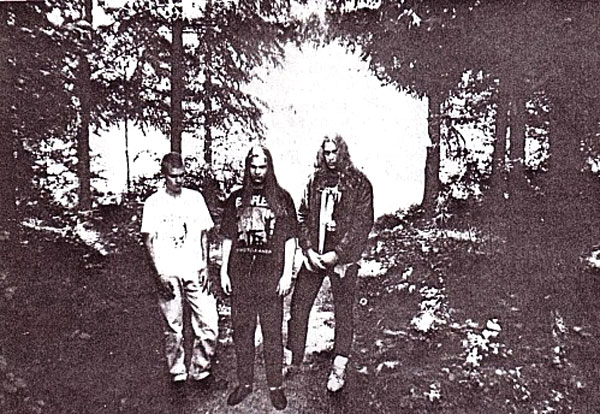 From the band index of Daniel Ekeroth’s Swedish Death Metal: “Insane gore/death from Örebro, started summer 1990 as Necrotomy. After a short period with another name I can’t remember, they settled for Necrony and blasted away. Insanely brutal, with lyrics that make you laugh in disgust. Obviously their inspiration was Carcass, Carcass, and only Carcass. Let’s face it, they sounded exactly like Carcass (and thus just like General Surgery). Being so unoriginal, they failed to impress me back then. I thought their best release was the cover album Necronycism: Distorting the Originals (featuring a guest spot by Dan Swanö). Listening back today, they actually sound pretty good! Jakobsson had reportedly never held a guitar before starting Necrony! He later returned to his main instrument, drums, and started successful grind group Nasum with Alriksson, who soon left. Further, Jakobsson also edited the great ‘zine Hymen during the 90’s. Note that they changed their lyrical content from “gore” to “pathological” early on—there’s a world of difference, you know.”

For the complete Swedish Death Metal experience, get the book HERE.