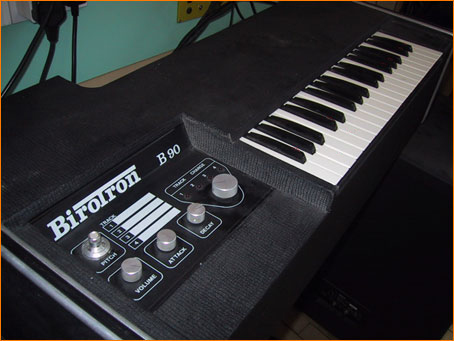 As explained in Mellodrama: The Mellotron Movie, during the peak period of Mellotron mania in the early 1970s, a slew of creative musicians and entrepreneurs took it upon themselves to build their own versions of the ingenious magnetic tape sampler. Here’s one of the more famous homespun machines, also probably the rarest. Backed financially by Rick Wakeman of Yes, Dave Biro’s Birotron was an attempt to store sounds on 8-track cartridges, the most expedient and widely available format of the day.

Did it work? Well, see the film for the full story. Like Brian Wilson, Mikael Åkerfeldt, Fabio Frizzi, Jon Brion, and many others, Dave Biro tells his story in Dianna Dilworth’s Mellodrama: The Mellotron Movie documentary. And later in 2013, the incredible story will be laid out in even more detail when Bazillion Points releases Dilworth’s upcoming book on the Mellotron, the Chamberlain, the Birotron, and other analog samplers.