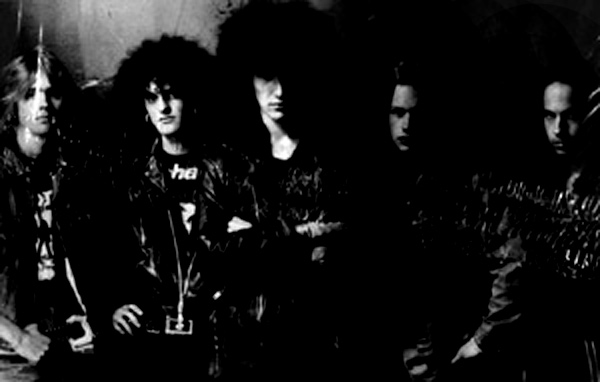 This isn’t a death metal band by strict definition, but AGONY still deserves total metal respect. Cutting their teeth in the fertile Swedish crust scene, the band later morphed into an adroit Bay Area style thrash metal unit that paved the way for the deadly explosion that would change Sweden for ever!

From the extensive band index of Daniel Ekeroth’s Swedish Death Metal: “This Stockholm (Solna, actually) act was founded in August 1984, originally as the pure crust punk band Agoni. The group steadily went in a thrash metal direction following the addition of drummer Moberg and guitarist Sjölin. They stuck to their punk roots for a while, touring as Agoni with Swedish crust gods Anti Cimex across the U.K in 1986. After that it was all thrash, and the band secured a deal with Music for Nations in 1987 after their second demo. Although their album The First Defiance was recorded with two guitarists, Pelle Ström was fired before Christmas 1987. He later joined The Krixjälters/Omnitron and Comecon. After Agony broke up, Moberg joined Rubbermen. At their best moments, Agony actually echoed the mighty Slayer, and they were surely one of Sweden’s best thrash metal bands.”

Signed copies of Swedish Death Metal can be ordered HERE. Ships today with a bonus gold-and-black on steel badge!