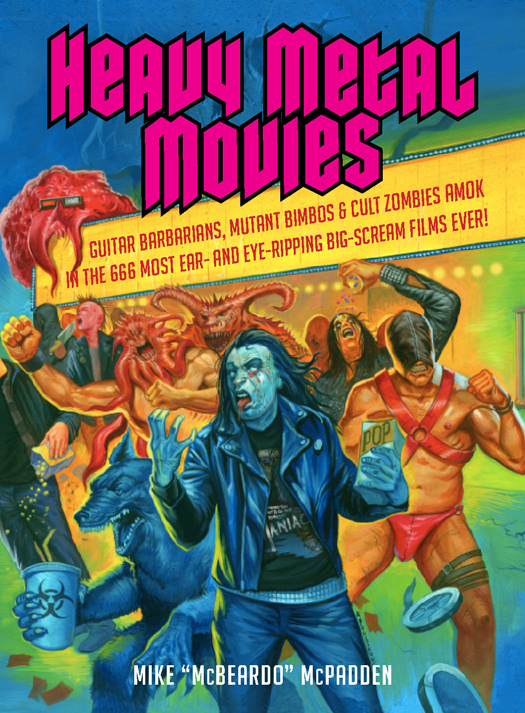 Bazillion Points Books is proud to announce the upcoming release of HEAVY METAL MOVIES, by Mike “McBeardo” McPadden.  Lavishly illustrated, and featuring more than two-times-666 of the most metallic movie moments of all time, Heavy Metal Movies is the ultimate guidebook to the complete molten musical cinema experience—positively the most horrifying book ever written!

Exploding with over 666 (two times over) of the most intense movies of all-time, including headbanger classics like: This Is Spinal Tap, Heavy Metal Parking Lot, Trick or Treat, Black Roses, Black Sabbath, The Decline and Fall of Western Civilization 2: The Metal Years, Rock ‘N Roll Nightmare, The Dungeonmaster, River’s Edge, Gummo, Lord of the Rings, Over the Edge, RoboCop, Saw, Savage Streets, The Toxic Avenger, Hard Rock Zombies, The Phantom of Paradise, Airheads, Evilspeak, Evil Dead, The Devil’s Rejects, Monster Dog, The Wicker Man and over one thousand more.

Brooklyn-born Mike “McBeardo” McPadden is the head writer of the online phenomenon Mr. Skin. In addition to years of freelance journalism (Esquire, Black Book, New York Press), and more than a decade as a Hustler editor and correspondent, Mr. McPadden has also done time as a B-movie screenwriter.