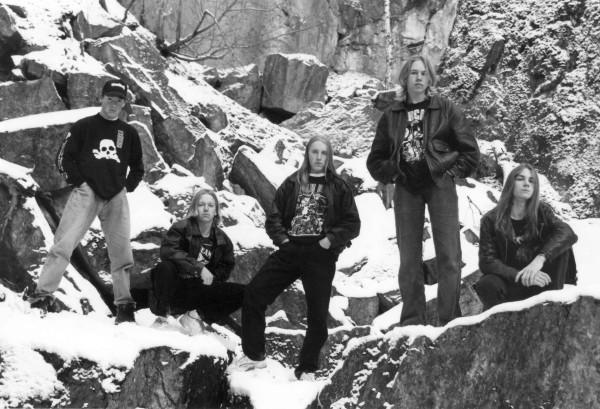 Every week we take a nosedive into the extensive band index of Daniel Ekeroth’s Swedish Death Metal to see what old corpse we can drag into the sunlight. All-too-many Swedish bands failed to reap the rewards of their unquestionable talents. In the case of WOMBBATH, the brutality was certainly all there—and they distinguished themselves with a very un-Swedish sound—but their career cut short after just one demo, an album, and a couple EPs. Their problem was partially timing—who could compete with the exciting Norwegian black metal wave?—but they might have erred in choosing a band name that summons images of a cuddly Australian marsupial.

From the book: “Sala band formed in August 1990. They produced pretty groovy death metal with deep grunted vocals. Not bad, but lacking the quality of bands from nearby Avesta. Uncanny, Interment, and Fulmination were always a notch above. They actually released an album, though it passed mostly unnoticed in the days of black metal. Lindfors went on to In Thy Dreams.”

For the full story of the rabid Swedish death metal scene, get a hardcover copy of Swedish Death Metal at this location: