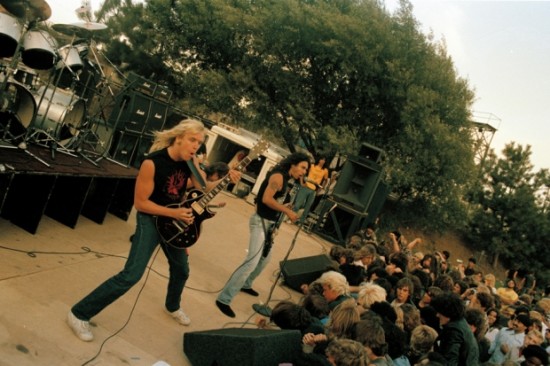 SPIN.com is honoring the life of Slayer guitarist Jeff Hanneman with a gallery of early photographs by D.R.I. bassist Harald Oimoen, coauthor with Brian Lew of the book Murder in the Front Row: Shots from the Bay Area Thrash Metal Epicenter. The photos capture several live and candid moments from the rise of U.S. thrash metal circa 1984, including Hanneman and Slayer performing outdoors on a plywood stage; Slayer’s very first face-to-face encounter with the members of Metallica; Oimoen’s classic sleeve photo from Slayer’s Hell Awaits album; and a moving portrait of Hanneman and his eventual substitute in Slayer-Gary Holt of Exodus.

The gallery can be viewed HERE: