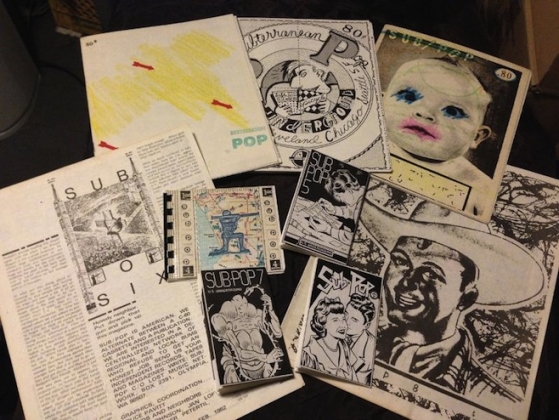 Underground music fanzines have been at the heart of almost every Bazillion Points release. The majority of our authors at one point or another published some kind of homemade periodical, even Andy McCoy! Our We Got Power!, Touch and Go, and Metalion books are based largely on reprints of classic early ’80s zines. In each case, the zines opened portals to historic happenings. Coming 2014, our Sub Pop USA digs further into the DIY regional scenes of the 1980s, and charts the growth of a “network of amateur enthusiasts” that eventually took over the mainstream with bands like Nirvana and Soundgarden in the 1990s.

Bazillion Points Books and Bruce Pavitt are proud to announce the Summer 2014 release of SUB POP U.S.A.: The Subterranean Pop Music Anthology, 1980-1988 [ISBN 978-1-935950-11-0]. This deluxe flexi-bound art book will include complete reprints of Sub Pop zine issues #1 through #9, plus Pavitt’s Sub Pop column from Seattle’s The Rocket paper, and a gallery of rare images from the dawn of the American 1980s independent scene. The span of time starts during the new wave era in 1980, and carries through the early years of Sub Pop Records, and the discovery of bands like Soundgarden, Nirvana, and Mudhoney.

“Sub Pop is the best index there is of American local independent scenes…imaginative and the writing is snappy and descriptive”-New Musical Express, 1981

Driven by the power of independent thinking, the Sub Pop zine’s particular field of interest was artists from the Midwest and Northwest. Punk and new wave fans in major cities were puzzled, surprised that there were enough bands in those regions to devote a column, let alone an entire fanzine. Even more puzzling was the exclusion of artists like the Clash, Gang of Four, Blondie, or PIL, soley because of their major label associations. Early issues featured impassioned rallying cries for local action that make more sense than ever today, alongside early published artwork by Linda Barry, Charles Burns, and Jad Fair.

From Beat Happening and Pell Mell to early records by the Beastie Boys, Metallica, and Run DMC, Sub Pop was a 1980s independent music bible, written with a diverse appreciation for happening scenes across the USA. In 1986, Pavitt put his ideas into practice, launching Sub Pop Records with the historic Sub Pop 100 compilation and Soundgarden’s first release. While the Sub Pop Records legacy is today legendary, the groundwork and creative wellspring that put Seattle on the musical map is assembled here for the first time.

Bruce Pavitt currently lives in Seattle with his family. He remains engaged in music by periodically speaking at conferences and festivals, consulting with artists and music labels, and working as a DJ. A true music fan, Bruce continues to study music history in every genre. He is also the author of Experiencing Nirvana: Grunge in Europe, 1989.

Bazillion Points books are available at all good bookstores, music stores, and online retailers, distributed to the book trade via PGW/Perseus in North America, and Turnaround in Europe, or directly from the publisher.